Macrofungi, such as mushrooms, puff balls and bracket fungi are typically identified by the phenotypic characteristics of their fruiting bodies. When they are not fruiting the macrofungi along with the rest of the fungi species had to be identified on the microscope level. DNA sequencing of fungi cultures and later DNA barcoding have become the method of choice for fungal identification [cite]20405123[/cite]. Sequencing an entire genome of a organism is a complex, time consuming and expensive task, although modern technology has considerably reduced the both the time and the price. Work on categorizing animals showed that comparisons of a region of DNA or a gene that shows a high rate of evolution can be used as a barcode that identifies and differentiates individual species. The gene selected for the animal kingdom, COX1, was found to be unsuitable for fungi and plants, and a number of alternatives have been explored[cite]19459974[/cite]. Recently the fungi DNA barcoding community has proposed the internal transcribed spacer (ITS) regions that bracket the conserved nuclear ribosomal repeat unit or 5.8S region to be the standard barcode marker for fungi[cite]22454494[/cite]. There are also a large number of ITS copies per cell[cite]2249259[/cite] which helps when sequencing fungi from soil or wood samples where the initial amount of DNA is low. DNA sequence databases contain over 172,000 entries covering the ITS region that cover many of the abundant macrofungi(Schoch et al., 2012). In the last few years there have been an increasing number of DNA barcoding studies of common and commercially interesting fungi species.  The studies range in size from the identification and or recharacterization of a three species of Cantharellus[cite]23080022[/cite] to larger studies of a family of mushrooms like the recent taxonomic revision of true morels (Morchella) that described 19 North American species , 14 of which were new[cite]22495449[/cite]. The goal of the work will be to sample, identify, describe, DNA barcode and voucher species in the local area. These specimens can be used in a number of different projects:

To begin with our project has been split into two parts:

The general study covers goals 1-3 of the above list and the Amanita study meets goal 4. For the general study we have set up a protocol that includes taking a picture in the field of the mushroom with a sample number on a card in the picture, annotation, tissue sampling and then voucher preparation. This works fine for dedicated volunteers who are prepared to follow the protocol and will hopefully result in good quality vouchers. For the Amanita study we carry out extensive annotation on all samples, this is required so that we can compare specimens to others that have been described and so that there are accurate records for any new species that are identified. We will also aim to educate our members in both the methods used and how to perform the sample preparation and analysis while expanding their knowledge of fungi taxonomy. There is a famous programming motto from the Perl computer language that is very apt for any project: “There’s more than one way to do it”. This guide should be considered as just that, a guide or example on how we at WPMC have set up our barcoding project. Feel free to take things you like and leave things you don’t. However, we would be interested to hear if you think we are carrying out a particular aspect of the project in the wrong way or for that matter the right way.

The basic procedure of the analysis can be broken down in to a number of steps. First we need to collect and sample fungi of interest. Then the DNA has to be extracted from the samples. Next the region of interest, the ITS region, will be amplified via polymerase chain reaction (PCR). The PCR product will be checked for purity and sequenced. Finally the resulting DNA sequence will be compared to a database of existing ITS sequences using bioinformatics tools available on public websites or on local computers. There are three main approaches that we can take:

The first approach requires additional equipment, chemicals and solvents. It would also require some training and skill on our part to carry out the reactions successfully. Once the equipment has been purchased it would be the cheapest method. Quotes obtained from three companies for complete processing of a raw mushroom sample the third approach would be prohibitively expensive. The second approach showed a lot of promise. By using DNA-absorbing filter paper and no lab equipment we can prepare a sample that can then be analyzed for a low cost by at least one company, MCLAB (South San Francisco, CA). After an initial study reported here we decided to use Waterman FTA plantsaver cards as our standard method. We were then fortunate enough to set up a collaboration with Professor Rytas Vilgalys at Duke University that reduced the price of analysis and allows us to store the specimens at Duke herbarium. The WPMC, along with many other clubs, uses a simple sample collection sheet that records basic information, mainly the location and habitat for a specimen collected in the field. Identification of the specimens is then carried out after the walk by club members and mycologists referring to mushroom guides and references as needed.  Most of the public barcoding repositories require more information about the specimens than we typically collect. We could easily sample all the specimens identified at a foray or walk the majority of which would not have a barcode recorded in the public databases but and record minimal documentation about them to quickly sample a lot of species. There are some advantages to this simple approach:

The disadvantages are that:

Our original project design was to collect a reasonable level of annotation information. After the 2014 Lincoff Foray  we have decided to reduce the amount of information collected as much of the visual details are recorded in photographs. We have optimized the requirements to:

This reduces the documentation burden on the collector and should make the project more accessible to the majority of the clubs members.

The mushroom guide books do a reasonable job of describing the different species and the environments where they can be found so we do not have to document everything. When the DNA barcodes are analyzed and made public there are a number of possible outcomes:

Comparing the clubs life list to the ITS barcodes in GenBank we can see that 2/3 species fall into case 3. This means that other researches will start hitting situations 1 and 2 when comparing their samples to our GenBank entries. In preparation for case 2 we will voucher all our samples and deposit them in a publicly accessible herbarium. We have also developed a system of worksheets to record as much information as possible about each specimen. If we encounter a case 2 situation then I think it tells us that we need to re-sample the species to try and determine if there was an error on our part or if the barcode is reproducible a reason why it is different. It may not always be possible to determine the differences between specimens from what was thought as the same species with a voucher and picture and minimal information but it should be sufficient.

To facilitate the project we have put together a DNA Barcoding kit. The kit contains everything, except a camera, that would be needed to sample and document a specimen. It contains all the sample description forms and checklists to record the annotation information and keep track of what has been done. There are copies of the protocols and descriptive guides to sample annotation. There are tools to help with the annotation like a ruler, scalpel and color swatch. Finally it contains the FTA plantsaver cards that are actually used to collect the DNA sample. We built four kits and club members can sign them out before a club walk or foray. 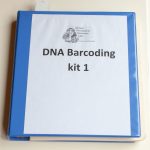 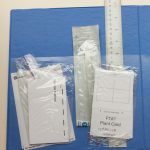 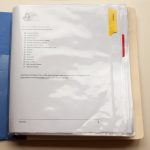 Find out more about principles of DNA barcoding on the introduction page. Continue to find out about the protocols, infrastructure and documentation used for the project.