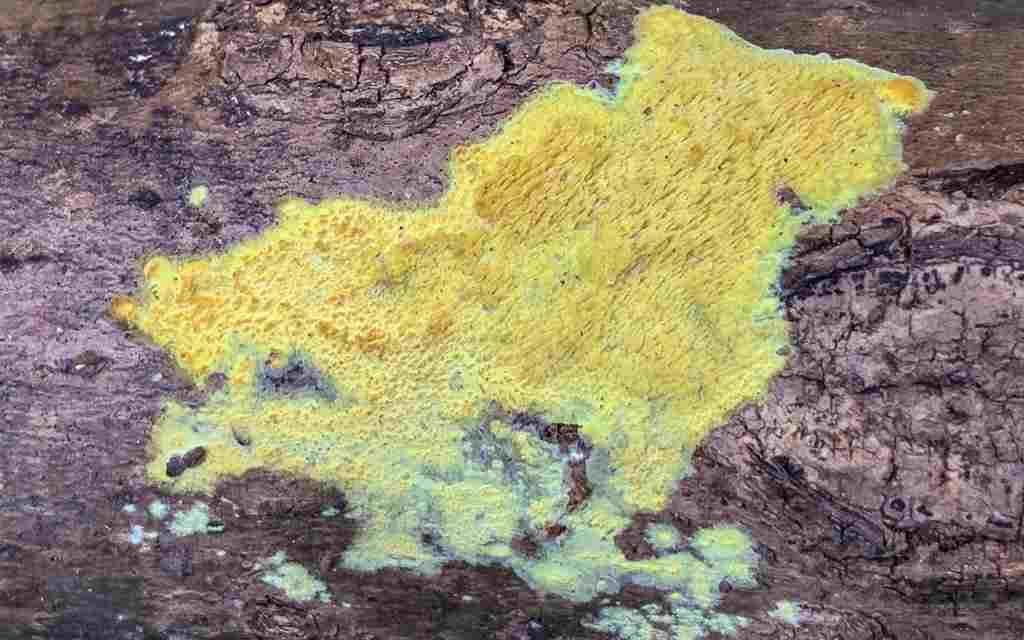 It was great to be back at Phipps Conservatory and Botanical Gardens for the annual Bioblitz. This year the public could be attended again although there were still restrictions. All the different organizations and specialists involved in the BioBlitz were on the the front lawn under sun shelters. The public could attend walks and help collect specimens and also see some of the findings for the event at the shelters from fish to snails, plants to mushrooms. The WPMC table was manned by La Monte Yarroll and Richard Jacob. We had a couple of microscopes and a computer monitor in order to help the public see a bit more detail as they were not meant to touch specimens on the table, Richard Jacob brought a basket of mushroom species from Hartwood acres, collected the day before, so that we would have something to show as our walk was not until 2pm. We added a few more specimens through out the day that we collected in the surrounding area especially a number of species growing in the grass and mulch in front of the conservatory.
It was a hot day and the majority of he people signed up for the walk either canceled ahead of time or did not show. The grandmother/grandson couple that did received a personal guided tour Phipps run and Panther Hollow Lake looking for mushrooms and slime molds. 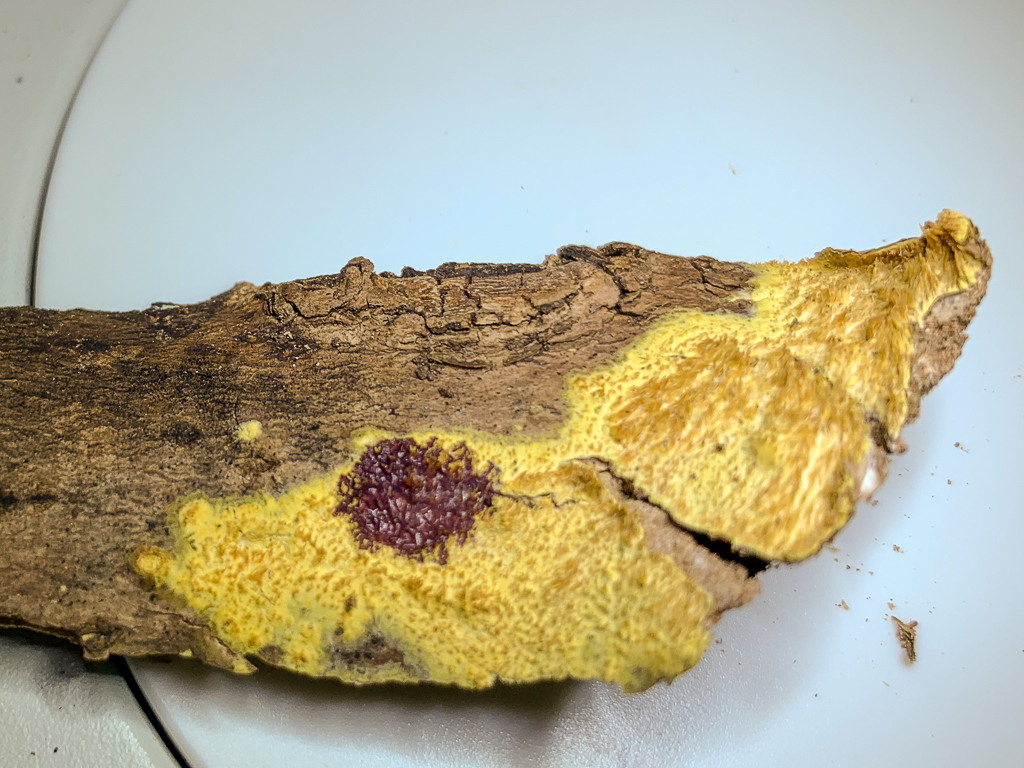 Find of the day for me was the Mycoacia uda crust mushroom. A totally unexpected find from picking up a random stick that showed a bit of color on a walk up the hill on the way back to the Phipps front lawn. Although the common name for this yellow toothy fungus is pale yellow splash tooth it is often bright yellow. A drop of ammonia or potassium hydroxide on the crust results in quick and strong purple reaction. This species has only been reported once before in the club’s area and has not been identified on a club walk. A very pleasant surprise to the end of a hot day. 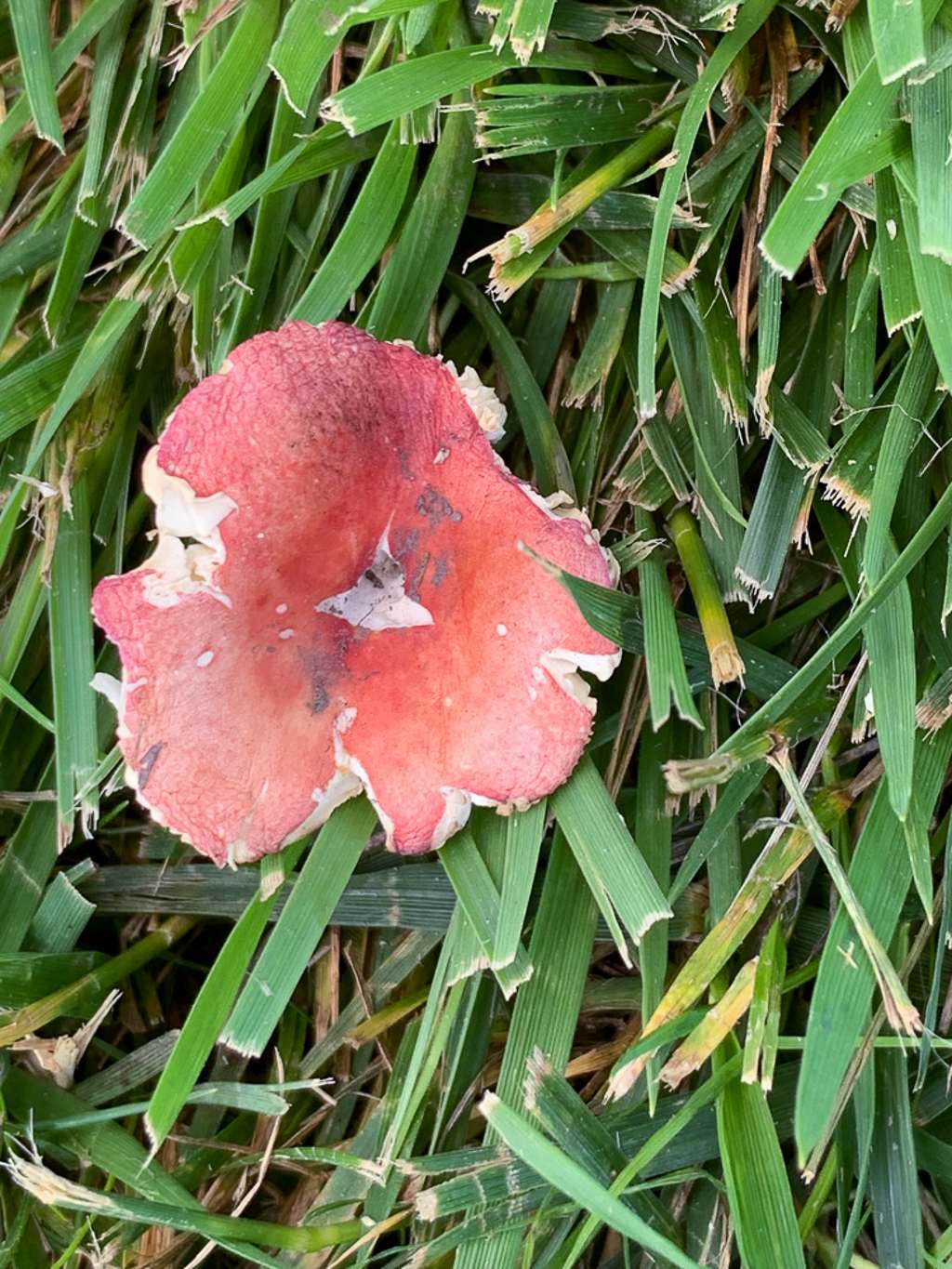 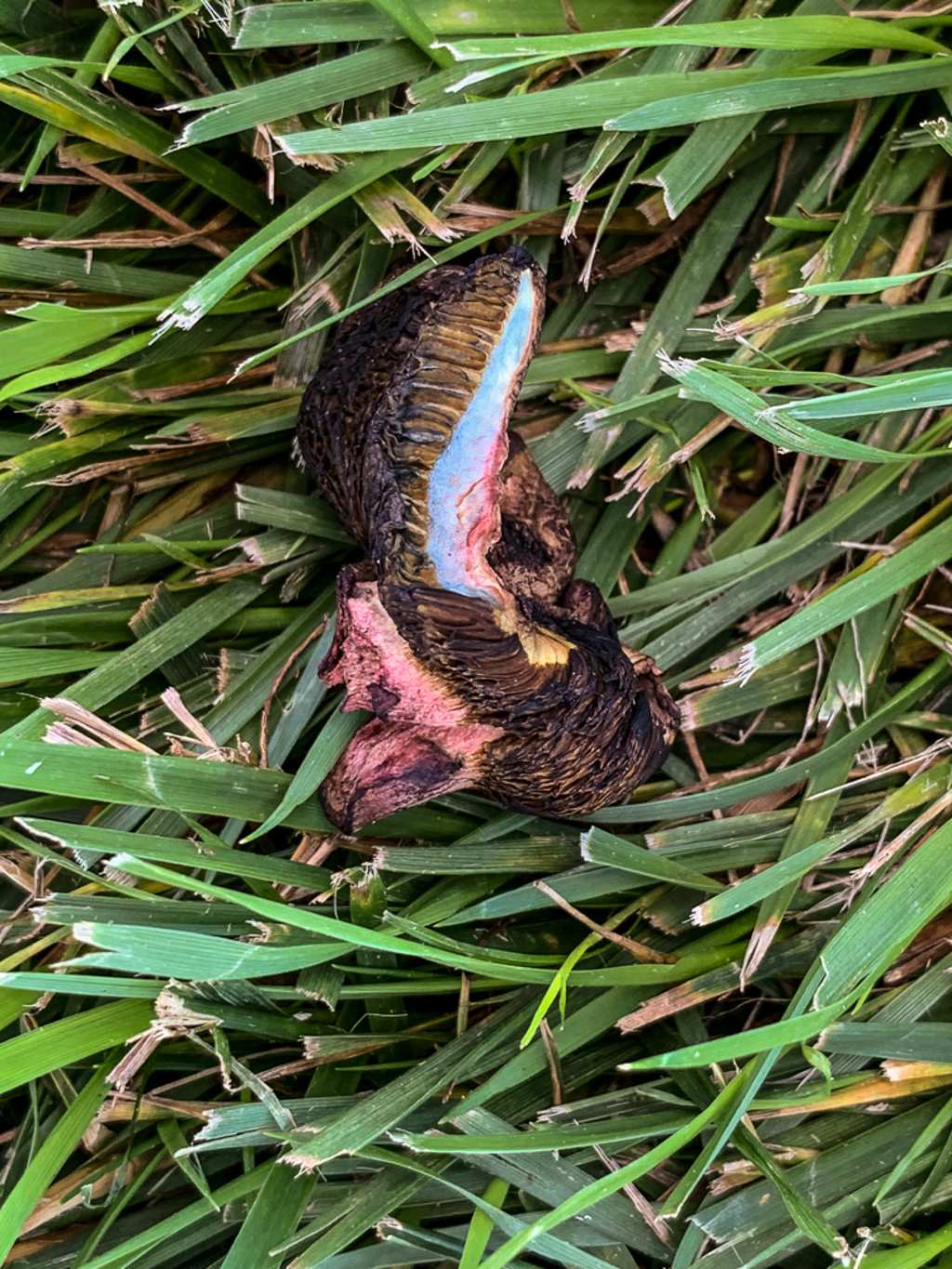 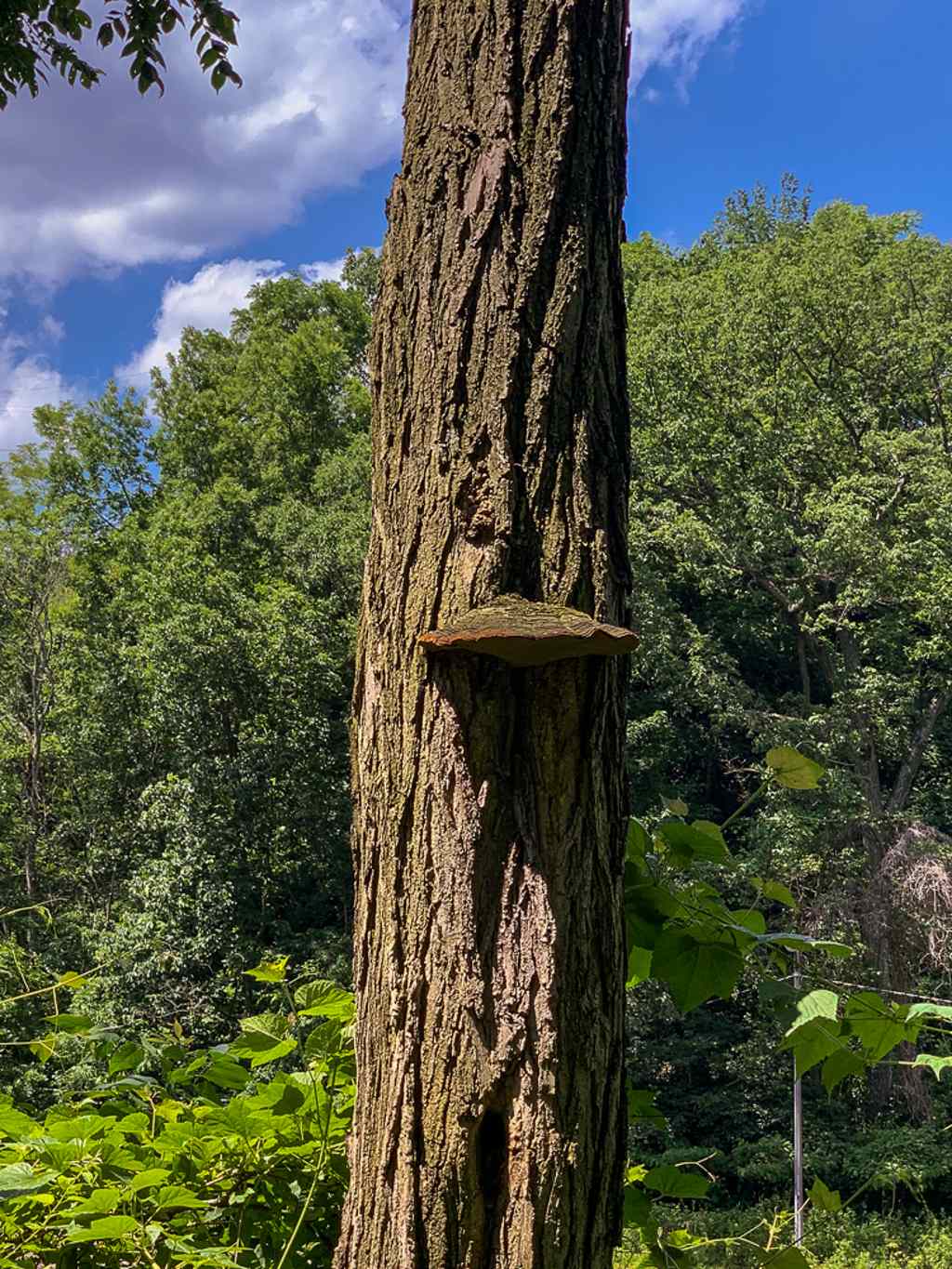 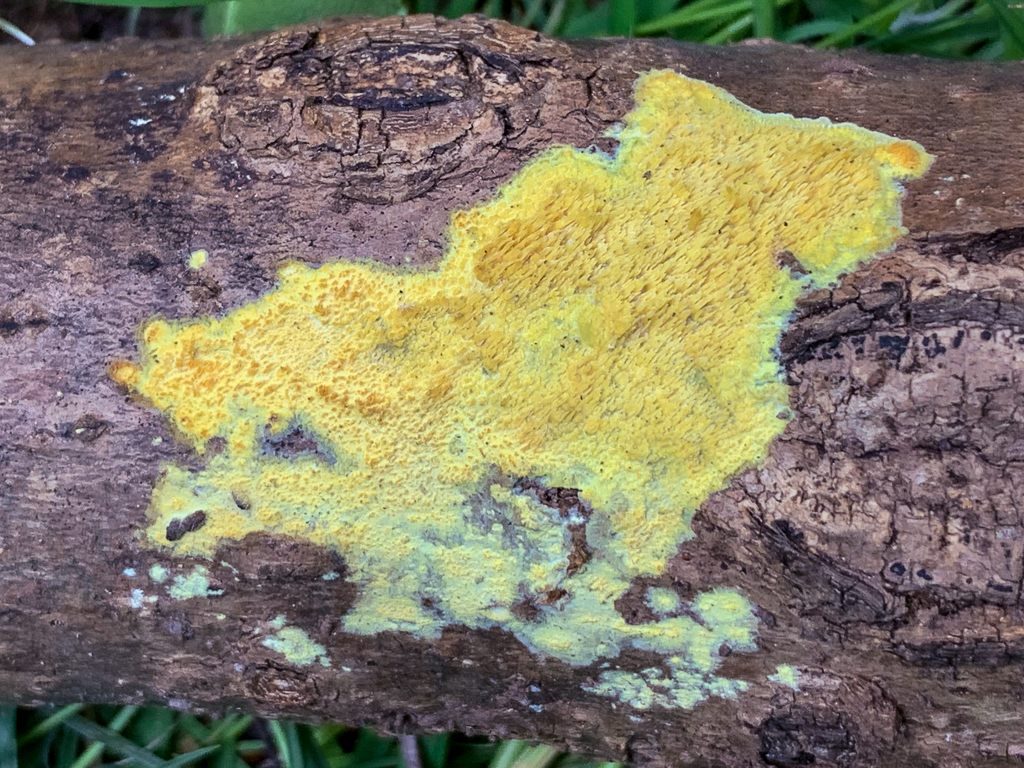 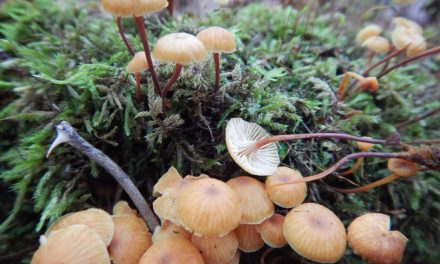 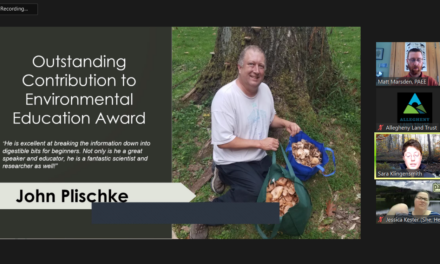 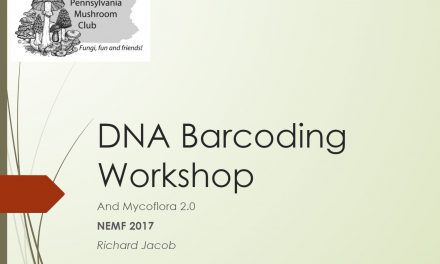