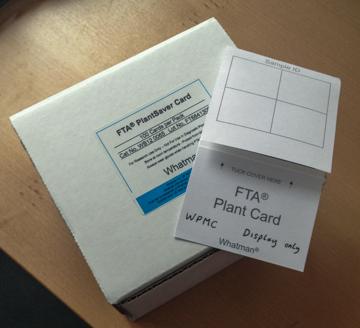 The DNA Barcoding project is moving ahead and our first major purchase has arrived.

The Whatman FTA PlantSaver Cards will be used to collect the mushroom DNA. A small piece is cut off the mushroom and placed on one of the four sample spots. The cover is closed over the sample and it is then crushed/squashed with a blunt object so that the material inside the mushrooms cells are squeezed through the filter paper and then allowed to dry. The remains of the mushroom material can then be removed. The DNA from inside the cells is captured by the cards and stabilized such that it can be kept at room temperature without degradation.

Information about the samples is recorded and the cards will then be sent to a commercial laboratory where the DNA will be extracted, amplified and analyzed. After a few days to a week the lab will return the DNA barcode sequence that can then be compared to other mushroom sequences using computer software.

We are now ready to test the cards and a commercial laboratory with some well know mushrooms to see if the technology works as advertised.

← How Many Mushrooms Do You Know?
Lifetime membership awarded to Dick and Mary Ellen Dougall →