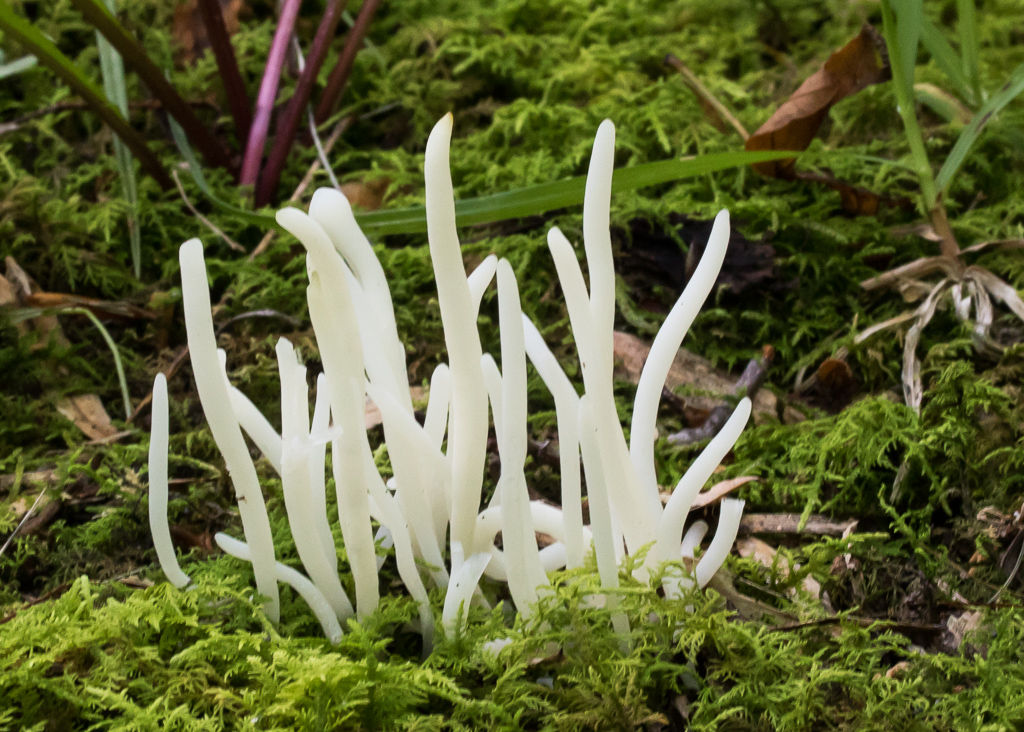 Walk leaders Rachael Mahony, Environmental Education Specialist, from PA Department of Conservation and Natural Resources and Richard Jacob from the WPMC. A group of over 30 people took a guided walk along Grove Run trail hearing about the forest and picking mushrooms. The walk through the forest produced a wide range of species from the tiniest marasmas and slime molds to larger polypores. We returned to the picnic area starting point along the road and picked up quite a few larger Boletes and Amanitas in the clear areas at the side. Pick of the walk for me was the Microstoma floccosum, Pink fringed fairy cup. Even though I walked along the same path as everyone else it was the sharp eyes of one of the junior members on the walk that spotted cup growing on a dead branch and brought a specimen back to the identification table.

A couple of members took the opportunity to explore the area after the main walk finished and added a few more very interesting species. Up at the top of Linn Run road there is a bog in the Spruce flats wildlife area. At the edge of the bog John Plischke III found a Cicada abdomen that was infected with fungal growth. This is very likely to be Massospora cicadina. The Massospora cicadina parasitic fungus has been named the “Flying salt shakers of death” by Angie Macias in an article describing the fungus. The other interesting species found in this area was the Galerina tibicystis (Sphagnum-bog Galerina). Finally we observed that the Mountain Laurel leaves leaves had purple spots on them that was caused by Phyllosticta kalmicola.

With over 60 species found this was a very rich fungal area. According to long time club members it has been over 10 years since the club last walked Linn Run. We are grateful for Rachael Mahony and the DCNR for inviting us to co-host a walk in the area and look forward to returning in the future.